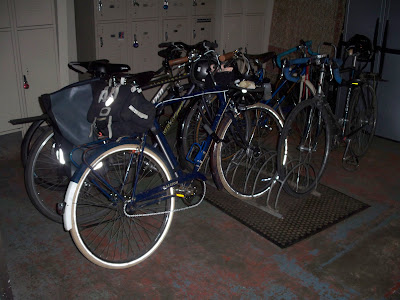 I’m quitting my job at the hostel.  I’ll elaborate more on the “why” next week*, but I’ll be there until the end of May.
There will things I won’t miss.  While working at a hostel is definitely cool, it is “customer service”.  I won’t miss dealing with issues and problem guests.  (People can do some stupid, “I can’t believe they did that!” type of shit.)  I won’t miss dealing with all the peculiarities of a 100 year old building and a 25 year old hostel. I won’t miss trying to explain what a hostel is to clueless Americans (it’s not a hospital or hospice), nor trying to convince someone that yes, there are hostels in the U.S. (They’ve been around for 75 years!)  And I definitely won’t miss the response “You must meet some interesting people!” when they find out I work at a hostel.  (Seriously, 4 out of 5 people say this.)
But there will be things I miss.  Yes, I do meet some interesting people at the hostel.  What group of people do I find the most interesting?  Bicycle tourists, of course.
I haven’t thought much about them over the past few months because it’s winter.  We do get a random hearty tourer in the off-season who doesn’t care about short days and lots of rain and cold, but they are few and far between.  But now spring is here, and while the valve on the bicycle touring spigot is not open to “full” yet, we are starting to see the first drips and dribbles.  For example, I checked in a guy on Wednesday that just completed a Sacramento to Portland tour (via the coast)**, and we also have a girl heading east out to the Columbia Gorge.
I love it when I see folks with fully loaded bikes roll up to the hostel!  I always try to find some space for them, even if we are technically full.  I love seeing our bike storage area filled to the brim with bikes. I love giving tourists bike maps and routing advice, especially on ways to get to the coast.  Of course I get a bit jealous, as I’d like to go off and tour with these people, but I have to work instead. 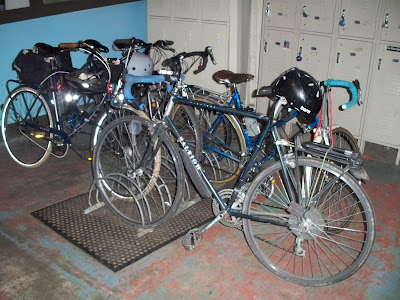 And I will be leaving just as touring season switches into high gear.  Oh well.  Hopefully there will be a good number of touring folks during April and May.  And I’ll just have to be satisfied with my own touring adventures, rather than living vicariously through others.
*The suspense!
**The general rule of touring the Pacific Coast is to head north-to-south, because you’ll have a prevailing tailwind.  However, this is a summer pattern, and during winter the prevailing wind is coming from the south, so it is better to go south-to-north.  However, it will still be hella wet!

3 thoughts on “The Things I’ll Miss”