My new schedule has started! I now work Tuesdays through Saturday. That means more opportunities for weekend adventures with others. And what better way to start my Sunday-Monday weekend with a camping trip? Peter decided to rent a cabin at Stub Stewart State Park and put out the call for participants. And it just would work out in my favor, for once.

Stub Stewart is one of the closer camping destinations to Portland, about 40 miles as the crow flies. But if one takes the MAX light rail out to the end of the line, it’s just 22 miles to the park, half of it on a bike trail. This makes it quite the popular bike camping destination. However, I don’t go out to it that much, not as much as I feel I should. In fact, the last time I was out there was December of 2014. (And not until I dug through old posts on this blog did I realize it had been that long!) But the cabins are nice, especially in the off season, which is when I usually end up going out there. (Go here to read about my other times at the park, and for more thorough descriptions of what can be found there.)

Of course, the biggest issue with this weekend adventure was that I still work Saturday mornings. I managed to get out an hour early at 2 pm, but up until the minute I stepped foot inside the cabin, it was a continual hustle. I made good time because I had to, there was no time to pause for anything but essentials, like a stop at the market in Banks. (Thankfully, the weather was decent.) I got to the cabins right about 6 pm, when the last light of day had faded. Adventures like this will be easier in summer, when the sun stays up past eight.

In the cabin was Michelle, Dean, Tom, Cassie, and of course Peter. Tom and Cassie would be sleeping in their camper van, so it would be only four of us. (Technically, the sleep limit on a cabin is five, which is how much bed space is provided. But we were in a deluxe cabin, which could have easily slept eight.) We chatted for a bit in the warmth of the cabin, and thought about starting a fire but never got around to it. (And I had an invite to another cabin where some other cyclists were staying, but never made it.) I was pretty beat, so I was in bed by 10. That’s also when it started to pour outside, perfect timing.

It was still wet in the morning when we woke. I made some breakfast on the front porch, huddled over my storm. The rain let up by 10, so I packed up and left. The first eight miles of riding from the cabins is all downhill, and it’s very easy to get very cold in the winter, so I bundled to the max and stayed warm.

But that wasn’t the problem. About a mile outside of Banks the skies opened up, and opened up good. Not only that, there was a pretty stiff headwind, and the rain stung my face. By then I was in open farmland with no cover, and didn’t feel like riding back to Banks, so I soldiered on, slowly getting soaked. Of course, the rain stopped right before I got to Hillsboro. Oh well. Thankfully the copious amounts of wool I wore meant that I didn’t get that cold, just uncomfortable. Nothing to do other than get on the MAX and go home.

Thanks Pete, for putting this together! I should get out to Stub Stewart more often, hopefully this summer. And I need to do more “cabin” camping in the winter, too. They are affordable, at about $45 a night plus a booking fee. I always end up going with other people, but it would be nice to splurge on one myself sometime… 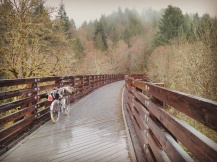 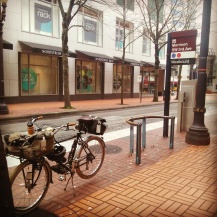 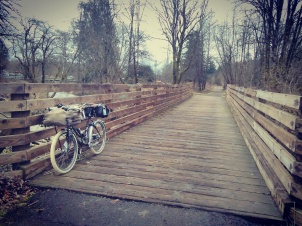