I’ve lived at my current house in Woodlawn for three years. The distance to work is just a little under 6 miles (10 km.) Over the three years I’ve refined my morning bike commute into the most efficient and fastest route possible. I’m generally okay with it, as it sticks mostly to low traffic streets. It isn’t particularly scenic, but it has its moments.

And I’m bored of it.

Every once in awhile I tell myself I need to change it up, try out a different (read: longer) way. That’s great in theory, but this would require waking up earlier. I’m no morning person; I can barely get to work on time as it is. So the familiar route stays for the most part, and I stay frustrated.

But I can change up my route a bit on the days I DON’T need to be there by 8 am. I usually work at least one shift a week that starts at 3 pm. While I’ve done my regular commute route even then (esp. if I realize I need to get going), lately I’ve been trying to go the longer, more scenic way in. This generally means aiming closer to the Willamette River. This is especially useful if I want to check my PO Box at East Portland Station on the way in and/or get a quick lunch. 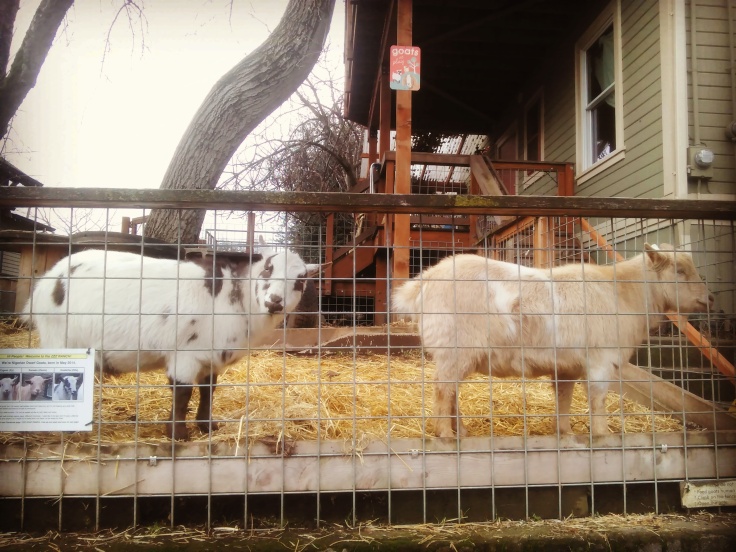 This “alternate” commute happened on Thursday. On the way southward, I’ve been choosing NE Rodney Ave vs the faster and more popular NE Vancouver Ave. While I am guaranteed to see cyclists on Vancouver,* I’m guaranteed to see the goats of ZZZ Ranch on Rodney. Urban goats! I’ve known about the former Belmont Goats for years, but didn’t realize that there were three goats on Rodney until December! I try to stop by for five to ten minutes. And lucky for the goats, I have quarters, so I can feed them from the “goat food dispenser”, an old candy machine. 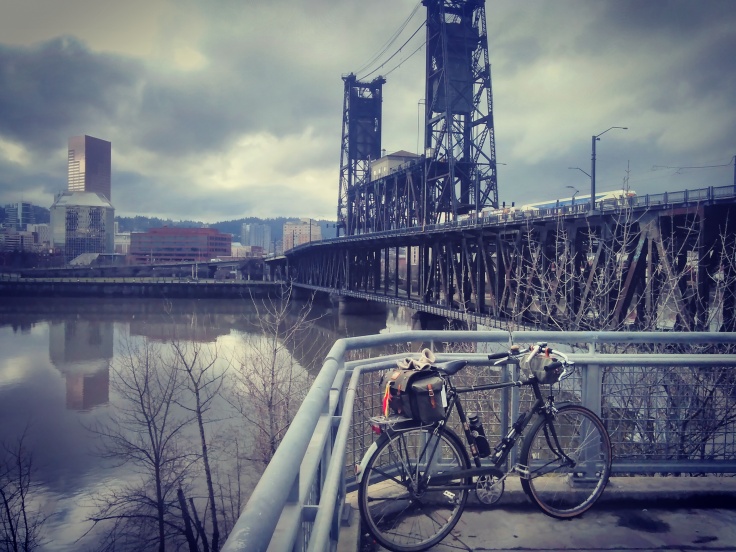 From there, I cruised further down Rodney, got over to Vancouver to get through the Rose Quarter, and paused at the overlook by the Steel Bridge where you can take the path down to the Eastbank Esplanade. I love stopping here because the view of the Willamette River and the city is great, and the Steel Bridge is my favorite bridge. I’ll usually see a couple MAX light rail trains crossing the span on the upper deck, but I often see some train action on the lower deck, too. Sometimes I catch the turning around of Amtrak’s Empire Builder,** the train I have taken eastward to Minneapolis and Chicago many a time. I didn’t see the Builder today, but maybe the next time I come down this way?

From this point, I could cruise down the Eastbank Esplanade for a nice waterside ride of a mile or so. I decided to take the quicker way inland to get to the SE Industrial District and pick up my mail and a bite to eat. Maybe next time, when I have more time.

It feels good to shake up the commute a bit from time to time. And the added bonus of feeding goats doesn’t hurt!

*And gravel. They take a long time to clean the gravel out of the bike lane after a snowstorm.

**When the Builder comes into Portland, it’s pointing southward. In order to get it pointing northward to go back towards Chicago,*** the train must cross the Steel Bridge where it can turn around via a wye on the east side of the river.

***Yes, yes, Chicago is east, I know. But the train has to head north across the Columbia first.