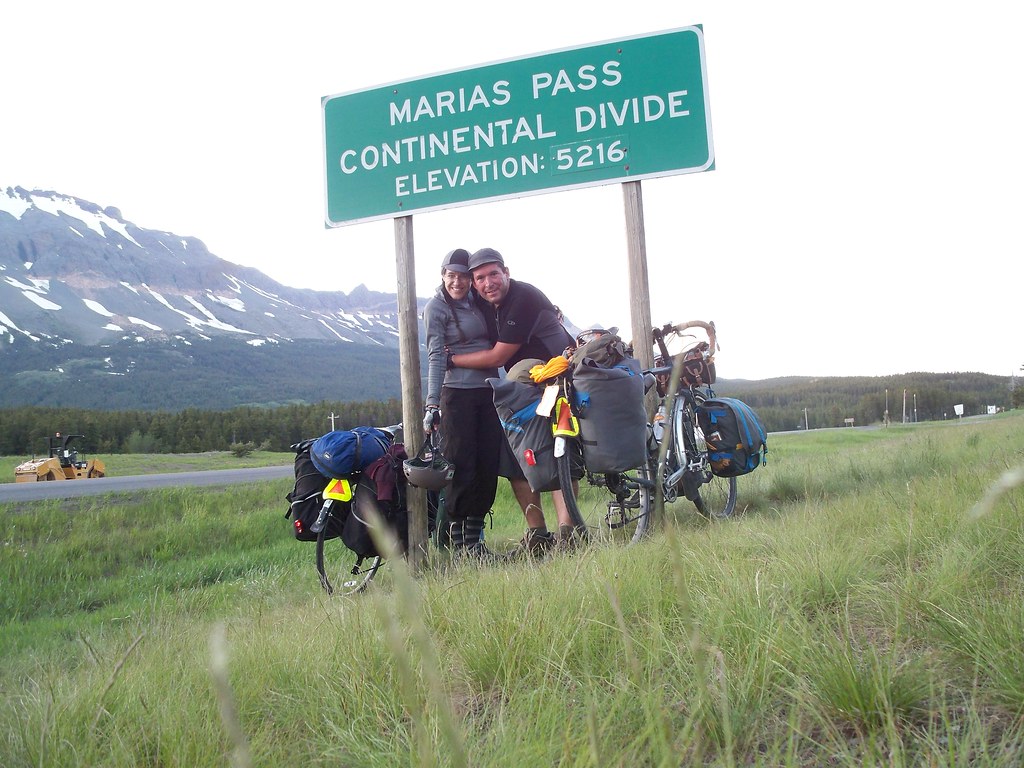 Hello folks. Today is Friday May 27. And exactly five years ago today, April and myself packed up our belongings, returned our apartment key to the property management company, and hit the road on our big Cross-Continent Bike Tour. Five years! Wow. Time does fly. At times it seems like we just got off the road, and at other times, it’s a lifetime ago.

Since I have not had children, bought a house, or hit the Powerball jackpot, it’s safe to say that the four months on the road, on the bike is the biggest thing I’ve ever done besides moving across the continent. After hearing about other folks’ big bike tours, I never thought I’d be able to do one, until I did one. Yeah, we didn’t get all the way to the Atlantic as planned, but we got pretty far nevertheless.

Last night I looked over some of the blog entries from the tour. (You can too, just dig through the archives from May 2011 through October 2011.) Memories came flooding back. Man, it was a great time. Yeah, sure, we were broker than we hoped, always stressing about money. And sometimes we questioned what the hell we were doing. But we did it.

It took me a few years to reach some sort of closure with the tour. We were bummed that we didn’t get all the way across. But we went slower than we thought, and my itinerary was a lot more ambitious than practical. We got into the Midwest in later September, running low on cash and enthusiasm. I’m sure if we really, really, REALLY pushed ourselves we could have made it at least to the Atlantic. But in retrospect, I’m glad we didn’t push ourselves. But I always had that lack of completion hanging over me, the idea that we somehow failed, that others looked at us as failures. And we promised ourselves to “finish the tour” at some point, start in Chicago and head east.

But over the past five years, that desire to finish has all but faded. Sure, I’d like to do some touring in the Northeast and especially Atlantic Canada at some point. But now it would be more out of a desire to do that, not to “finish” a tour from 2011. Because, yes, that tour is done. Anyways, there’s other tours I’d like to take up first, like stuff around the Rockies. Or a bit of the Southern Tier during the winter.

And yes, there is still a fire in me to do a longer tour. Not four or five months, but maybe two. The Cross-Continent tour made me realize that I’m no Heinz Stucke or Lael and Nick. I like having a home base, and there are only so many days in a row that I want to live out of the metaphorical panniers. When will that big tour happen? I was hoping that I’d have done one by now. At best I can aim for next year. But realistically it might be two years. As I get older, I worry a bit more about stability. And as Portland gets more expensive, it gets tougher to give up something like reasonable rent at the place I’ve been living for 2 1/2 years. I don’t want to “put all my stuff in storage again” and start anew.

That was probably the toughest thing about the 2011 tour: Coming home. On one hand, it was a huge relief. On the other hand, I had hoped things would be different when I got back, we’d find a new place to live, I’d find a better job. Things were different, but not in the way I had hoped. We slipped back into familiar patterns despite not wanting that. I ended up getting my old job back, which was/is good/bad. Portland has felt different in the five years since I got back. It was changing before we left, but the break from the Rose City made the changes feel more stark. Portland got bigger, busier, more expensive, more fancy. I’ve definitely been frustrated by some of those changes, but it’s still the place I love. And sometimes I do want a change, but for the life of me I haven’t figured out where else I’d want to live.

I’m glad we did the tour. We got to see some cool places, and meet/hang out with some really cool folks. It’s nice to prove to myself that I could pull off something like biking day after day for months on end. Over the years, the hardships of the tour have faded with time. When I think back, I don’t first think of the time that April’s chain broke in the middle of Saskatchewan and we spent two hours trying to hitch a ride. Or the Big Agnes pad that would leak no matter how many times I replaced it. No, I think about things like cresting our last mountain pass (Sunwapta) in the Canadian Rockies and the glacier we’d see soon afterward. The wildlife. The sunsets. The canola fields. The time we crossed the Mississippi River by foot, so what if it was at its source? Those were great moments, and I own them all.

If you want to check out the photos from that tour, go here.

And if you don’t want to wade through a bunch of old posts, this post from when we hit 1,000 miles on the road is a good encapsulation of my feelings.

2 thoughts on “Five years since The Big Tour”