Man, it’s been damn nice in the Pacific Northwest the past couple weeks. After a very, very, wet winter starting around November, this was a welcome relief. We’ve had nice days throughout the rainy season, sure, but they were few and far between, and we never got more than three days in a row free of precipitation. But since Tuesday March 29th, it’s been dry and mild around here, the only exception was rain from Sunday night April 3 through Monday April 4. And it’s supposed to remain dry here until tonight (Monday). We’re going to have a damper week, though not as wet as it’s been in the past, and it’s supposed to subside come the weekend.

In any case, the paragraph above is a long-winded way to say it’s been nice here. And I tried to take as much advantage of it as possible. Earlier last week I actually camped on the coast (more about that in an upcoming post!) But the past few days I’ve been trying to do a little after-work adventuring.

On Friday, I kept it simple, as I was still a bit worn out from all the fun on the coast. I simply swung by the store, got a burrito and a beer, grabbed my radio from home and rode to a local park, in this case Farragut. I like coming to Farragut because not only is it close to my house, but it’s pretty unknown to the general population, hidden. It was nice but a bit breezy, a high of 83F/28C. Yes, that’s hot for early April, record breaking. And if you think that’s bad, it got to 85F/29C on Thursday!

Saturday was a bit more “epic” as it was my first visit of the year to the Leif Erikson Trail in Forest Park. Leif Erikson is an 11 mile unpaved road that winds alongside the West Hills, and runs under forest the entire time. A nice respite from the city while still being in the city! I don’t visit the trail much or at all in the winter due to the muddy conditions, and I figured that with the soakfest that was this winter, it would be good to stay away until we got a good dry spell. And thankfully, the trail was pretty dry overall. Sure, there were a few patches of mud and some token puddles, but the mud can stick around even in summer. And this time I was smart and lowered the tire pressure before entering the trail (and reinflating it when leaving) so the bumpiness didn’t feel as bad. After getting out of Forest Park, I cruised across the Saint Johns Bridge and enjoyed a beer at Occidental.

It’s been nice having nice weather for a bit. I know that there’s still some rain before summer kicks in, and we’ll be back down to more normal (60’s) temps, but man, after this winter? We deserve the break! 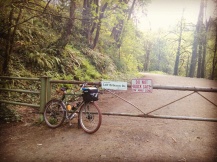 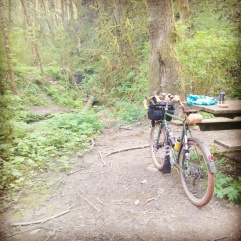 2 thoughts on “What do you call pre-summer, anyway?”