Okay, let's get it out the way: The bike camping trip I just took out to Ainsworth State Park in the Columbia River Gorge was not the best of times. It was wet. Wetter than expected. And yes, there's always the threat of rain out this way in March, and we got a little rain... END_OF_DOCUMENT_TOKEN_TO_BE_REPLACED

Hello friends and fiends. It’s just two short days until the first Three Speed Ride of 2016 occurs! Meet me Sunday morning, March 20th, at 11 am. We’ll be meeting at Rivelo, 401 SE Caruthers. This is just across from the rail museum, just east of the Tillikum Crossing, and a stone’s throw from the OMSI/SE Water MAX station on the Orange line. We’ll depart at 11:30 am and ride somewhere between 10 and 20 miles, end somewhere with food and adult beverage, and have a tea stop somewhere in between.

And please remember that this ride is only for bikes with internally geared hubs from 2 to 5 speeds. No single speeds, hub gears bigger than 5 speeds, or derailleurs. (The exception is a Brompton with a two-speed derailleur and a three speed hub. You just can’t use the derailleur.)

Notes for this ride: 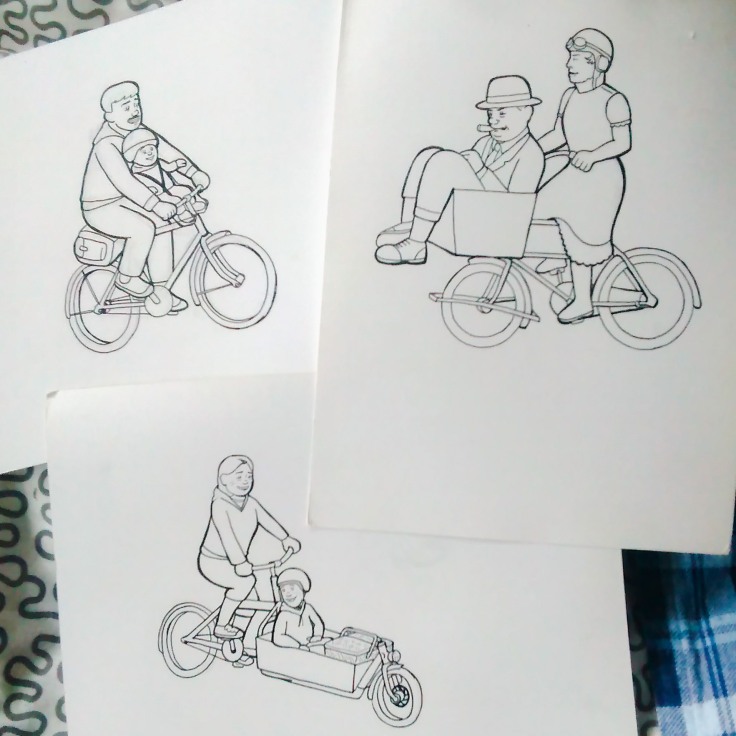 Just unearthed the original art I did for G&O Family Cyclery in Seattle. If you haven’t heard, their shop was destroyed by that natural gas explosion that leveled two buildings in the Greenwood neighborhood last week. So they need all the help that they can get! Go here to contribute: https://www.gofundme.com/n7tmv4xg

Friends, you may have noticed a lack of mention about m y three speed, the Raleigh Wayfarer. That’s because I haven’t ridden it in months. Currently it looks something like this. 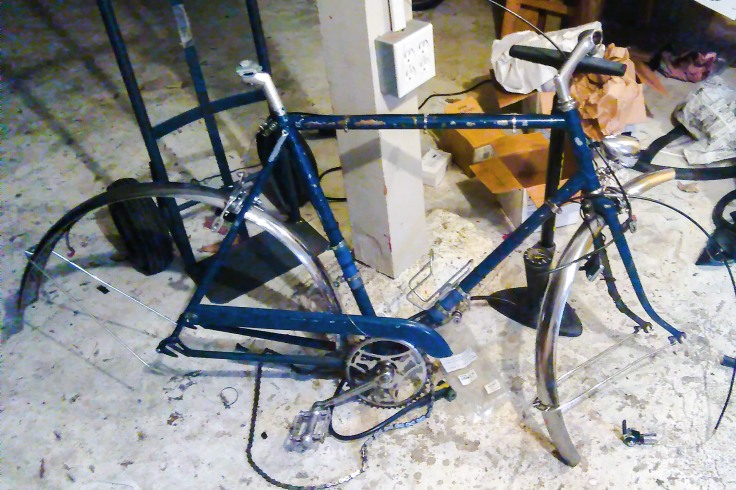 Yep, this stripped down frame is what remains of my Raleigh Wayfarer. No, nothing bad happened to it, no, I didn’t get into an accident. But it’s time to move on, and the Wayfarer is done.

What “killed” it isn’t one big thing, but maybe a dozen smaller deaths. The biggest issue is the paint. Despite it being repainted twice, the paint is in bad shape, scraping and flaking off. I did briefly think about getting it stripped and powdercoated. Hell, I was thinking about getting some braze ons added before the powdercoating, because why not? Heck, maybe canti bosses.

Then I realized how much effort and money that would be, all for a humble three speed frame. It… 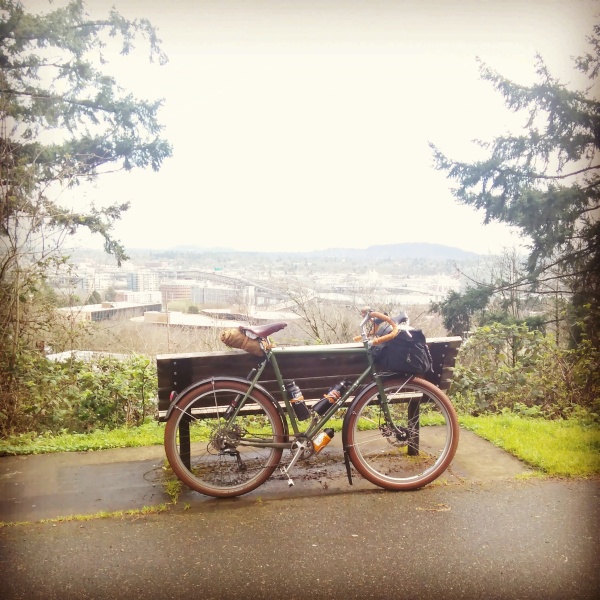 Hello all. Remember that last post, where I was on the fence about going on the 100 km populaire randonneuring event on Saturday? Well, I didn't go. The weather forecast did not look too promising, with a half-inch of rain forecast. Also, I've been feeling some hand discomfort so I need to tweak the handlebars... END_OF_DOCUMENT_TOKEN_TO_BE_REPLACED 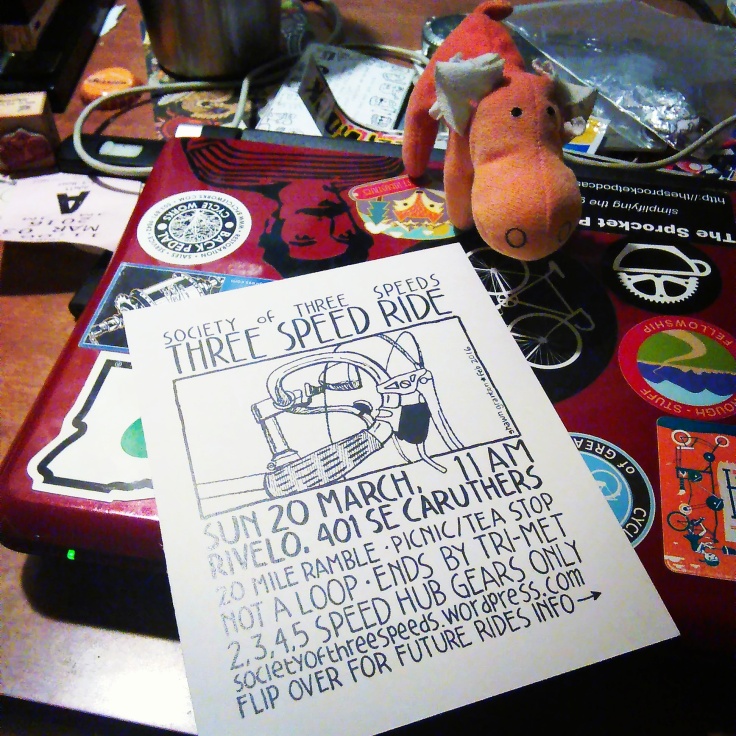 moosemoose would love it if you came on the Three Speed Ride on Sunday March 20th!

You know we here at Society of Three Speeds are old fashioned. If we weren’t, would we like three speed hubs so much?

Anyways, one of the old fashioned things we like to do is get the word out about upcoming events by paper means. We print up a bunch of post cards and send them out to local members and other people on our Postcard Club list. (Not on the Postcard Club list, but would like to be? Go here to get on it!) But sometimes we run across a nice three speed on the street, and we like letting them know about the ride as well!

That’s where the magic of laminators come into play! We laminate a few of those postcards, then punch a hole in the corner. Through that… 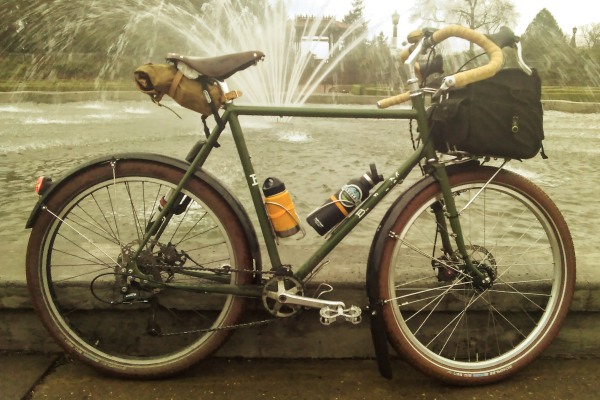 Versatility: It's what I like in my bikes. And the Bantam Rambleneur was designed to be my most versatile bike ever. Load it up with a bunch o' stuff? Sure. Strip it down? No problem. I got the Nitto Mark's Rack installed on the front of the Bantam last month. One configuration with the rack... END_OF_DOCUMENT_TOKEN_TO_BE_REPLACED