It’s spring here in Portland! Woot! Yeah, while technically by the calendar we’re still in a season called “winter”, I’ve often commented that Portland’s four seasons are: summer, fall, extended late fall, and extended spring. We don’t get “real” winter here, it’s basically November from…November through January. And February is when it tips over to the four or so months of spring we get, until the rains stop sometime in June (ish). I’ve seen bulbs budding, flowers blooming, and now, some nice weather, the nicest so far for 2016, with a high temp for Sunday February 7 of 62F/17C. It’s in the friggin’ 60’s man!

Of course I need to go on a bike ride. And Sunday afternoon into evening was a nice time to do so, since about 95% of America is indoors, watching television right at that moment. I think it had something to do with sports. Because the roads were even lighter than a typical light Sunday afternoon, it was bliss riding around. I headed across the river and did a few errands at places like REI. REI is typically choked with folks on a Sunday afternoon, today I could hear a pin drop. Trader Joe’s would also be chock-a-block with folks, today (after the “game” started), not so.

After the west side adventure, I crossed the Broadway Bridge (catching a glimpse of Hood glowing in the setting sun) and decided to hit the beach down on Swan Island. I hadn’t been here since summer, so a day with mild temperatures seemed like an appropriate time to revisit. There were only a few folks down there, so I had the place mostly to myself while the day’s light faded and the glow and the hum from the industry along the Willamette River increased.

After that, I decided to head up the hill, have an adult beverage at Lucky Lab, and head home. The next few days will be equally nice, but unfortunately, there will be more people outside. 😉

Sunday was also a time to test out the new configuration on the Bantam Rambleneur. After six months of owning the bike, and despite the bike being designed around a front-load bias, I finally got a front rack! There was always the idea of having a front rack on here, but at the time of the build I was already stretching my thin budget, so it didn’t happen then. Plus, I wanted to see how far I could get without one.

The Eastern Oregon tour in September was the testing ground for the “rackless” setup, and I did okay with the barrel handlebar bag/two Anything cages/frame bag/Carradice Camper Longflap bag. But it was just okay. Thankfully it was a group tour, and everyone else had too much capacity (and the willingness to carry extra stuff) so it wasn’t a problem that I was pretty maxed out the whole time. But if I want to do more solo tours, unless I go with lighter/smaller things than I already have (and my setup is already fairly light and compact), I want to have a little more carrying capacity. I might not need it all the time, but it would be nice to have it when I do.

Of course, saying I need a rack is the easy part. Getting an appropriate one is a bit more difficult. Since I want to still use Salsa Anything cages on the front fork, and disc brakes present issues, I was on the lookout for a small platform rack that mounts high. The problem with this category is there’s not a big selection, and it tends to run towards the expensive side of things. Unless you have canti posts (I don’t) and want to go with the cheapie Sunlite rack (which I used on the Crested Butte for awhile, and was not impressed with), you need to go with something fancy. And ain’t no fancier rack maker than Nitto! I had my eye on the “Mark’s Rack” since it has adjustable struts. I saved up enough cash and got one last month, but just got around to having it mounted on Saturday.

Right now, I’ve got the classic setup of a Wald basket zip-tied to the platform, a setup I’ve come to like over the last three or so years, but haven’t had on a bike since I removed the front rack on my Crested Butte in October. (That giant Wald basket on the Heavy Duti don’t count! 😉  ) I know, very Grant Petersen. But when he’s right, he’s right. Now having the small front basket with barrel handlebar bag plus Carradice in rear makes the Bantam similar in setup to the old Bridgestone XO-3 I sold in late 2014. And it’s no surprise, since the Bantam basically replaces the XO-3 and the build was based around XO series geometry. Now, after thousands of dollars spent, I’m back to where I started from. Oh, the irony!

Having the Nitto rack also means I can use my custom North St. randonneur handlebar bag, a bag I haven’t used since I sold my Long Haul Trucker in late 2013. I’ll have to get the bag modded a little to fit the new rack (it was based around the Jandd Extreme rack I had on the LHT) and also add a decaleur (not to mention remove the barrel bag). It would be nice to use that rando bag for a bit, especially since I want to try a few rando events again this year. It probably won’t be my “regular” setup as I’ve grown to like the front basket setup, but it’s nice to have options!

To test it out on Sunday, I put a small load of groceries from TJ’s in there. Groceries is always a good test of handling and abilities, since they’re always heavier than you think they are. The bike handled fine, no differently than without the rack, basket, and groceries. I think I got a keeper here! 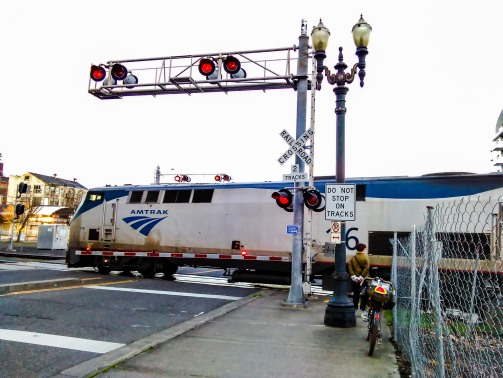 3 thoughts on “A Sunday Ramble while some game was going on, plus a rack for the Bantam”