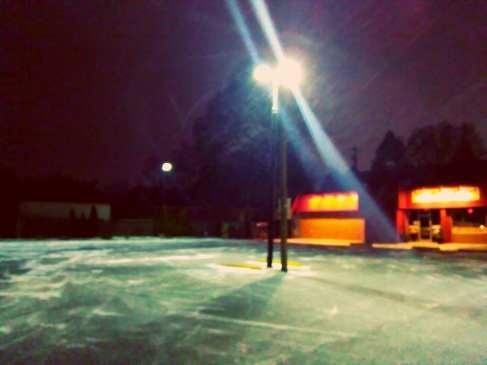 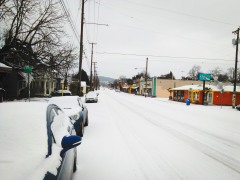 And without warning, and just like that, Portland got its first snow of the season, the first of 2016. (At least in the lower elevations, the higher elevations got a little last week.)

It’s been cold for Portland the last week, highs just above freezing, but sunny. Our “cold snap”, so to speak. And I knew that the weather pattern would be changing. Before I went to bed on Saturday night, the National Weather Service forecast for Sunday called for a 30% chance of a “wintry mix” on Sunday, emphasis more on freezing rain than anything else, before a milder and wetter pattern returned. I prepared to take the bus to work on Sunday morn, as biking in freezing rain is not a highlight of mine. Oh sure, I do have a studded tire I could throw on the Rambleneur, but for one day?

When I woke up Sunday morning around 6, the forecast had changed to a 60% chance of wintry mix, but the emphasis was still on freezing rain. So I got ready for work and left the house around 7 to get to the bus stop. At that point, precipitation had started, but it was all SNOW.

The ride to work wasn’t particularly bad, but the snow was coming down, and sticking. (The forecast had said if there was any snow, there would be little to no accumulation.) This worried the bus driver, since the bus had no chains on it. (In fact, he asked me if the road was icy beneath the snow, and I said no.) I’m pretty sure that Trimet wasn’t prepared for snow. In fact, with that weather forecast, NO ONE was prepared for snow. And even if the city was somehow ready, one to two inches here is like getting two feet in Chicago.

But should I have been surprised? In the (almost) fifteen years I’ve lived in Portland, there’s been a few “surprise” snows. In fact, I wrote about one in December 2005 here and here. And there was another one in December 2009. I’m sure there’s a few others that I hadn’t recorded. But our weather forecasters sometimes get blindsided by dramatic changes in local weather.

Anyways, back to the narrative. By the time I got to Hawthorne, there was getting close to an inch on the streets, enough to give everything a coating of white. Portland had entered into an alternate reality, that of “Actual Winter” vs. the damp one we usually have. And it only takes an inch! For sure, I have seen enough snows over my years to know what Portland looks like when it’s like this. But it’s always fun. And because Portland isn’t an “Actual Winter” city, everything shuts down. The streets get quiet. People go outside to have fun, even attempt to sled. Alas, I had to work.

By the time I got out of work, about two inches had fallen in the lower elevations. But now it was raining a bit, the streets were packed down, and things were getting glazed. Ice. This is the not fun part of dealing with this weather. While I was bummed earlier that I had “wussed out” by not biking in, now I was glad that I didn’t. Of course, I do have that studded tire, but to fight with the installation for an hour to use it for maybe a day? No thank you.

The bus ride home was agonizingly slow, maybe an hour, as the chained-up 75 creeped up Chavez and around obtuse angles as it’s on “snow route” now. I got off at NE 15th and Dekum  with my “shoe grippers” covering my boots. I trudged over to the market for a few supplies, and through Woodlawn Park where I saw a few folks sledding on a knoll. The park was peaceful.

The snow is probably going to last a day or so as the temperature is hovering near freezing. We’ll be getting more ice, though, but thankfully I’m off on Monday. It was nice seeing a little snow this winter, hope there’s maybe another snowfall before February.

And for those of you who think I can’t bike through snow, here’s a couple comix to prove otherwise!