Fall is finally here in the Northwest. And nothing speaks “fall is here” than the first good storm of the season, which happened Saturday, aka Halloween. We got 1.9 inches of rain (48 mm) that day! The most rain we got in one day in four years! Street flooding was the norm that stormy day, but our lightrail system kept a’running, even if it meant people on board would get their feet wet.

But it was nice on Tuesday, highs in the mid-upper 50’s, November weather. A good day for a li’l coffeneuring action!

As part of Rule 12 of Coffeeneuring 2015, aka the “Theme within a theme”, I ride all the bikes that are part of my active fleet, at least once. In October my Raleigh Crested Butte was up for sale, so it wasn’t part of my “active fleet”. But since I decided to keep it for now, that means it’s coming out with me for a coffeeneuring ride!

But first, I needed to do a few adjustments to the bike, since I stripped the bike for sale. The glorious Suntour XC-II beartrap pedals returned, plus a couple water bottle cages. I could have put a front rack back on, but I never tried the bike with a rear rack. I got a “Back Trails” rack via Craigslist a week ago. What drew me to the rack was not just the Pletscheresque “mousetrap” design, but the more modernized “Athlete” version of it with modern seatstay attachment, double struts on each side, and the ability to hold modern panniers, including loops near the bottom for the hook. I don’t know if this rack is simply a rebranded Pletscher or a knockoff, but it looks good and feels sturdy. And yes, I am aware that “Back Trails” is a brand normally sold in Target. What can I say, every once in awhile a discount department store gets something right, even when it comes to bicycles!

With a rear rack, the bike feels like a new machine. It’s nice not having a front load, especially since the front fork is the opposite of “low trail”. I still have to do a few more things to the bike, including swapping out the current saddle, which is doing me no favors. (I moved over the brown Brooks B-17 to the Bantam, the current saddle was a freebie installed on the bike for the impending sale.)

The coffeeneuring ride was a simple one, a 4.5 mile jaunt through North Portland. It was pretty late in the day (thank you, standard time!) so I decided to combine the coffee run with a burrito run. Thankfully Blend Coffee and La Bonita tacqueria are next door to each other on N Killingsworth, so I placed by burrito order, then walked next door to get house coffee filled into my thermal mug, then went back next door to pick up the burrito. Convenience!

And conveniently Blend/La Bonita are just a minute away from “Rivendell Ridge”/The Horseshoe, and the sun was setting. So I headed over to the Dead Madrona Tree to catch the last rays of sun while enjoying my burrito and coffee. Ah, simple pleasures. 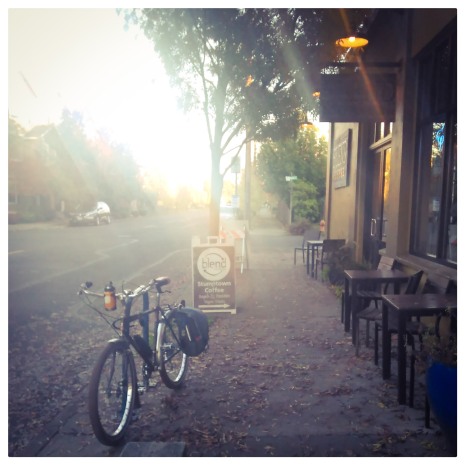 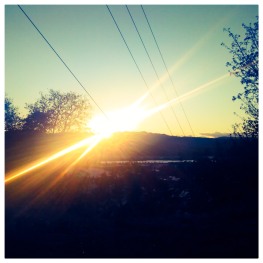 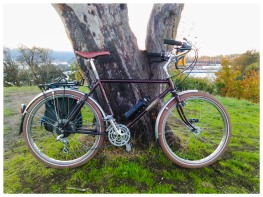 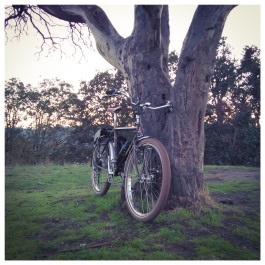 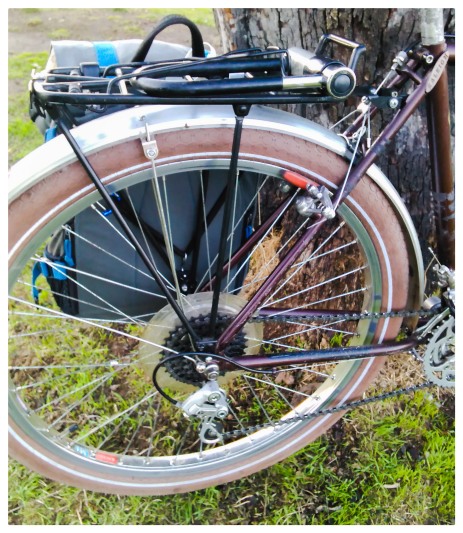 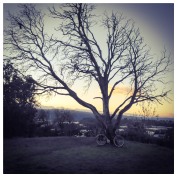 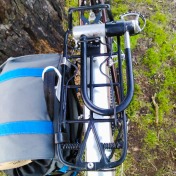 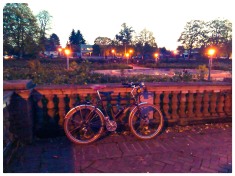 Boise Trip, 15 September 2021: Departing Portland by air.
Journal Comic, 21 Sept 2021. Sunset/Moonrise last night.
Roseway Neighborhood Mural, 12 Sept 2021
I’ve been hosting the Three Speed October Challenge since 2016. The concept of the challenge is simple: Ride your three speed during the month of October! Here are the basic stipulations of this challenge:
Hey folks! After a wet weekend (very much needed) we have a nice and dry Monday. The full moon is tonight, so it’s time for a Sunset/Moonrise Ride!
Photos from a late summer trip to Central Oregon, including Smith Rock, Cline Falls, Crooked River Gorge, and Cove Palisades. 23-26 August 2021.