I had no grand plans for a big adventure this mid-week, since there was A LOT I wanted to accomplish on my days off. (Did I get a lot done? Enough for now.) And since I’m leading the Three Speed Ride on Saturday, I’m going to get a “big” ride no matter what. But I needed to meet Ian later in the evening on Monday in North Tabor, and the day was beautiful so I left the house late-afternoon with the Raleigh Wayfarer (and moosemoose, of course) to go on a ramble!

Where to? Nowhere “special”, but just meander through (mostly) NE. I felt in the mood to get some rough stuff action, so I steered towards Cully, which would be the best bet for Unimproved Road fun. Once I got there, I was pretty much on autopilot, hitting up some of my favorite dirt/gravel streets in town!

It is amazing* how much unimproved action we have in town. Some of it is simply unpaved streets in various states of (dis)repair. But there are areas that are simply the rights-of-way of streets that were going to be built (and that are on the maps) but never did. Most of these “streets” are simple footpaths winding over mounds of earth and the like. Those are my favorite. And some of the “streets” are basically lakes for much of the year.

It was a few hours of hitting up the spots, with a break at Sajacawea Park for drawing and Berrydale Park for burrito consumption. A nice way to spend a spring afternoon. 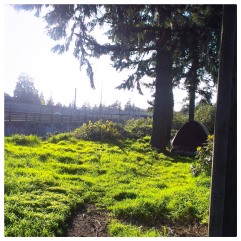 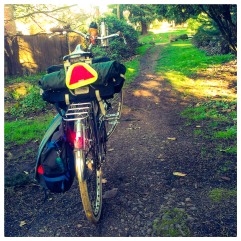 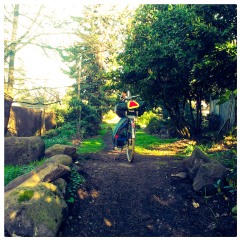 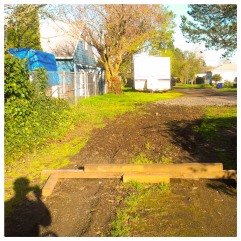 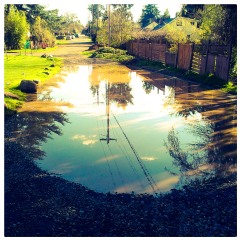 *Though some of the residents of the area may not find these unimproved streets “amazing”.