June turns into July in Cascadia. Or more accurately, Junuary turns into July. Junuary, it’s spring’s last hurrah. Despite nice weather for the first half of the month, the second half saw more cool (sub-70s) temps, and periods of rain, some periods downright intense. Just a few days ago we were looking at those sub-70’s highs with occasional downpours.

And then July hits. The rain goes away, and the “highs barely scraping 70F” turn to “highs scraping 100F”, the century mark, triple digits.* Yes, it does get that hot here, it is not a freak occurrence. (Mind you, it’s not a frequent occurrence, either.) Of course, the hottest temperature (so far) of the year has to hit on the day I’m leading a camping trip.

And the day before the trip the trip fizzles. Pretty much all the people who say they are going to go bail. And the weather forecast looks dire. I decide to scale back the more ambitious plans (bike to Cold Creek CG, 40 miles) and replace them with going to Battle Ground Lake in Clark County, Washington (25 miles). Seriously, I really thought about scuttling the trip, but two things prevented me:

In retrospect, scuttling would have been the smart option (and you’ll see why soon), but hindsight is 20/20.

*****
I met Hugh and Evan by the Cascades MAX station in NE at 11 am. From there we rode north across the Columbia River into Vancouver, Washington. The first half (12 miles) of the trip went fairly well. It was getting hot, already in the mid-80’s, but there seemed to be enough shade and a breeze to keep it manageable. We took an extended stop on the edge of Vancouver for lunch and supplies. And then we departed.

This was when it turned to shit. It was now 2 pm, the temp over 90F, the road shadeless, and no breeze to speak of. We got about four miles in, then Hugh called it quits. The heat was too much for him, so he snagged a ride back to Portland.

Then it was Evan and myself to solder the remaining miles. We were also feeling the heat (I was getting queasy) but we managed to push on without incident and make it to the park. At least Battle Ground Lake was a shady paradise, so even though it was about 99F at this point, it didn’t necessarily feel like it.

Battle Ground Lake was busier than I thought it would be for a Tuesday, the lake choked with day-use people** and the campground close to full. Still, we managed to snag a camping spot towards the back of the walk-in trail, which I knew from experience would be the quietest and most peaceful area of the park. And it was. We hung around the campsite until dark, and I snuck a quick swim in at sunset, when most of the day-use/family folk were gone. And sleeping outside overnight, tent stripped of rainfly, was indeed quite pleasant.

The next morn, Wednesday July 2, was quite a relief, cloudy and cool. While this day would still be warm, it would be nowhere near as hot, a high of only 81F, almost 20 degrees cooler. So making breakfast and riding out was pleasant. I opted for a more scenic albeit longer return route, one that brought us through downtown Vancouver (where we broke for lunch) and over the Interstate (I-5) Bridge. I got Evan to the MAX station at Expo Center and rode the remaining few miles home, where I decompressed from the trip.

Overall, things worked out, but it got a bit scary for a moment. Hugh made it back safely, but in the future I don’t want to repeat this scenario. I’m not going to say that I’d never go camp/tour in the heat again (on a tour sometimes it’s unavoidable) but next time I’d definitely try to depart earlier to beat the hottest part of the day. Due to the circumstances of the event, it wasn’t possible, but c’est la vie.

If anything, this overnighter at least gave me an opportunity to test out the new setup on the XO-3 when it comes to touring. And it handled well, I find that I’m mostly in the big (46 tooth) chainring unless I’m climbing, then I drop to the small (26 tooth) ring. One thing I need to get used to is how large the drop is: When you have a triple or compact double, you’re only dropping maybe 10-12 teeth when you shift in front, so the gear shift isn’t so jarring. But on a 20 tooth difference, you really notice it, and all the sudden you move from pedaling a too-hard gear to a too-easy gear, pedals flailing. But I feel I’m going to get used to it when I do (From now on I might upshift in the rear before downshifting in the front.) And since I stay mostly in the big ring, it’s not going to happen often.

And those new Schwalbe Little Big Ben 700x40C tires are great. No complaints.

Peaceful campsite, though just about 100F/38C. 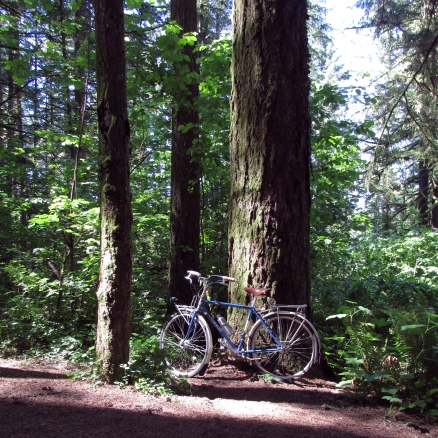 A Homer Hilsen in the woods. 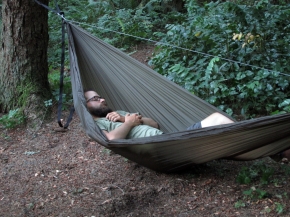 *This is one reason why I can’t be totally won over by Celsius. Saying “triple digits” or “hitting the century mark” makes it sound hot. Saying 38C, not so much. (I’m sure someone from A Land Of Metric Units is going to argue this point, but I stand by my opinion.)

**Evan thought there was something unique about this. I pointed out that anywhere in the Portland area that was remotely swimmable on a hot day was going to be overrun with people.