It was a “stay at home Sunday” around the UAL HQ. The snow covered with ice didn’t exactly encourage going out. and after “snow biking” the previous three days, I wasn’t in any hurry to bike either. Instead I spent most of the day doing things around the house. It’s nice to have days like these every once in awhile, and a place I don’t mind being a homebody. It’s been awhile since I’ve had a home that I felt comfortable in.

Later in the afternoon I decided to leave the house for a bit, partially because I wanted to get out, partially because I was out of beer. The Woodlawn neighborhood was still quiet, but people were out and about enjoying the snow. The temperature had finally hit just above freezing, so things were beginning to thaw. What probably was frozen-over snow a few hours previous was now turning to slush and slurry. Within another two days you won’t know that it had snowed. It was still beautiful right now, though, so I was doing my best to enjoy the moment.

Snows like this happen about every five years in Portland. I’ve lived here for thirteen years, and this is the third of the five year snows I’ve experienced. It’s the smallest of the snows, too. Snowpocalypse 2008 was the biggest with 2 1/2 weeks of snow and freezing, and the snow ice/storm of 2004 lasted for over a week and the ice was downright nasty. So this one isn’t as bad.

And while I’m appreciating this event, I’ll be happy when it’s over and done. I appreciate the one or two minor snows we get each year (if we’re lucky), but I did move from New England for a reason. I’m so Northwestern now that I appreciate damp winters. I think I could like true winter again, but it would have to be in a place that really sees snow, where I could jump in with both feet.

And I enjoyed exploring the city during the snow, but I didn’t do it anywhere as extensively as I did during Snowpocalypse. Part of that was the time factor, but I also think that after seeing so many Portland landmarks under snow during that event, it’s lost its novelty a bit. Still, I would have loved to have the time to get up to Mount Tabor or Washington Park.

My biggest annoyance this time around, however, is with the supposed name of the event.  It’s the modern thing to name a storm, especially in an era when everything needs a “hashtag”, especially in a place like this that only gets an event like this every five years.

I’ve seen people calling this storm “Snowpocalypse” or “Snowpocalypse 2014”. I can’t get down with that. When we foisted that title on the 2008 event, an event that consisted of a good two and a half weeks of snow, ice, freezing weather, and a city shut down, that made sense. That was truly a snowy apocalypse for Portland. It doesn’t make sense to recycle a name, especially since four days of this isn’t enough to warrant a snowy apocalypse. Of course, the only name I can come up with is “Cole Snass 2014”, Cole snass being snow in Chinook jargon. Anyone have anything better? 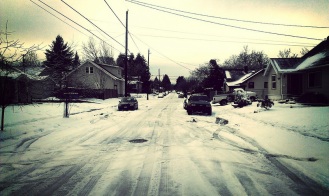 A good time to sell a sled.