Skip to content
To recap the first 24-ish hours as elucidated in April’s blorg:
After the ordeal of packing and cleaning the house dragged on for two extra days, we were anxious to get on the road. We finally departed Portland around 6pm on Friday May 27, with a goal of Paradise Point State Park, about 20 miles away. Partway through the ride April realized that her handlebars were coming undone (she has a stem extender). About 2 miles from the destination and with the sun almost behind the horizon, April’s handlebars finally unloosened completely. With no real alternatives, we managed to have our friend Todd Boulanger from Vancouver rescue us. He picked us up and brought us back to Vancouver where we crashed for the night. In the morning we brought April’s bike to the bike shop. The only real solution was to replace her quill stem with something longer, but the bike shop didn’t have any decent candidates, plus they were too busy to do the job. So we opted for a quick fix by Gorilla gluing the stem extender in place and hope it would last until Vancouver, BC, where we could get a replacement.
And from there:
When I decided I would do this crazy bike tour thing it was always with the intent on bicycling every mile. We’d only take alternate transport if we’re backtracking (as we will after leaving Vancouver BC) or if there is an emergency. But now the problem that presented itself on Saturday afternoon wasn’t technically back-tracking or an emergency, it was a matter of keeping a schedule. The rest of the trip won’t be so structured, but the segment from Portland to Vancouver, BC has a predetermined timeframe. We need to get to Vancouver on Friday night (June 3rd) so I can teach a workshop on Saturday. I did build some cushioning into the itinerary, but that cushioning was eroded when the departure got pushed back two days. And Saturday was already half over. So Todd offered us a ride to Kelso, 30 miles past Paradise Point, where we could get a jump on the ride into Lewis and Clark State Park. It wasn’t my preferred option, especially so early into the ride. But the 30 miles between Kelso and Paradise Point were miles I biked before, and not particularly interesting miles. So we accepted.
We got into Kelso around 4pm. We had about 5 hours of daylight to get the 30 miles to Lewis and Clark State Park. The route, while paralleling Interstate 5 for much of the way, stayed on quiet back roads. This part of the I-5 corridor is interesting for its lack of population. There are no large cities between Portland and Tacoma, and between Kelso and Olympia the towns are pretty small. Some of them are practically deserted! Despite the West Coast’s reputation as a bastion of leftism, this area is God-fearing conservative as evidenced by the proliferation of Christian signage. One might think that the roads would be filled with rednecks in monster trucks trying to run us poor hippie cyclists off the road. While we did see an assortment of monster trucks (when we did see traffic, which wasn’t much), they were pretty courteous.
The ride into Lewis and Clark was nice. The routing was gentle, some rolling hills and a few minor steeper hills. The rain that we’ve been plagued with managed to hold off for the most part; the one downpour we encountered in Castle Rock was observed from the cover of a picnic shelter. A lot of the route I used was based on the annual Seattle-to-Portland ride, which is a great routing for touring between the two cities.
I was a bit worried that we would arrive at Lewis and Clark State Park and find it full. After all it was a Saturday night over Memorial Day weekend, America’s “official” start to summer and the first big camping weekend. But Lewis and Clark is so off the beaten path that when we arrived just after sundown we found only a few fellow campers. It was almost like we had the whole park to ourselves. It didn’t hurt that there was an exclusive hiker/biker site! 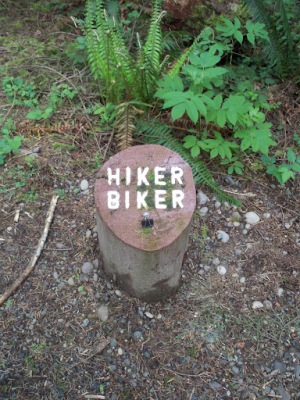 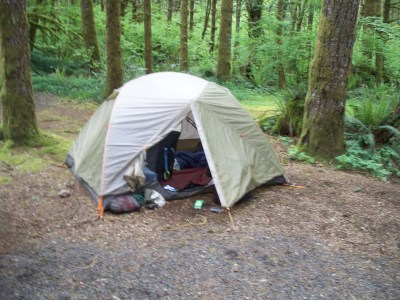 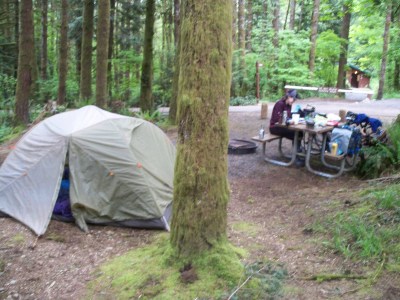 We had a lazy Sunday morning, making pancakes and veggie sausage. We also took a quick hike. Lewis and Clark is unique because it has one of the few stands of old-growth forest in the lowlands of western Washington. And the only reason that it exists is because somehow it never got cut down, despite plans to do so. It was great to be in old-growth, even if it was for just a moment.
The 38 miles to the outskirts of Tenino, where we’d spend the night, was pretty good. The route was pretty level with the exception of three small hills. The headwind we got for a ways made up for the lack of hills, though. There were a couple larger towns, Chehalis and Centralia, mixed with tiny Bucoda and not-much-larger Tenino. This area has seen tough times with the decline of the timber industry. Centralia has managed some semblance of a downtown, which is where we took a quick beer and fries break at the Olympic Club.
Besides a handful of roadies, we did manage to see other bike tourists! The first bunch was three young dudes on Saturday between Castle Rock and Vader. The second set was a man and a woman north of Centralia. They were all heading south and none seemed to want to stop. We did find out that the three dudes were heading south to Portland and then eastwards, at least that’s what they enthusiastically shouted as they passed us. As for the male/female couple, we don’t know where they were headed. They just grunted “hi” through gritted teeth. They didn’t seem too happy. Maybe it was because when we saw them it was 6pm and Lewis and Clark, the next stop if you were doing legal camping, was 25 miles down the way? Who knows. I wish that we could have talked to all of them, because I like talking to other tourists and feeling the comraderie of being on the road. Ah well.